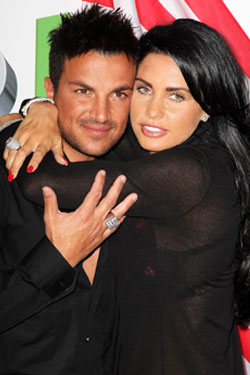 Katie Price and Peter Andre have apparently agreed to meet in the UK on Thursday to discuss joint custody of their children. They made the arrangements during a phone call yesterday, during which Peter turned down Kate's offer to meet him in Cyprus. Peter is furious that Kate is allegedly demanding £150,000 for photographs of her and the children in the Maldives. Another set of photos could get Kate in big trouble, as sunbathing topless is illegal and could lead to a prison sentence.

In more bad news for Kate, the most recent reject from The Apprentice Mona Lewis claims Kate told her she was in love with another man during a drunken night in Brighton in March. The other man is thought to be horse instructor Andrew Gould, and his wife unsurprisingly regrets meeting Kate.

CCTV footage shows Kate kissing a barman in Bristol during the night out that caused Pete to call time on their relationship. She's also been criticised by her ex, Gladiator Ace, who said she loved humiliating him. While all the rumours circulate, Kate's kept quiet other than updating her Twitter account, saying: "im still keeping a dignified silence i have made no comments they are made up im heartbroken i never wanted any of this we all miss pete".

To find out the latest news on Pete's career, just read more.

While the situation seems to be getting worse for Kate, reports suggest Peter's career is already benefitting from the publicity. Apparently, two major record labels are in a £1.5million bidding war for Peter's comeback album, and the singer has been asked to be the face of three leading brands, including a sportswear firm, because he's the "ultimate family man". He is also due to open the Chippendales show Here Come The Boys at the O2 next Thursday.

It sounds like this breakup is only going to get more and more complicated.