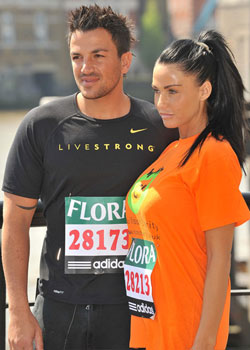 Katie Price and Peter Andre have been granted a divorce following a short hearing at the High Court today. The couple announced their separation in mid-May, and it is thought Peter filed for divorce first, but Katie also instructed her solicitors to take action leading to a situation known as cross decrees.

District Judge Bradley granted a decree nisi on the grounds the marriage had irretrievably broken down due to both parties' unreasonable behaviour. It is thought they have agreed a financial settlement and joint custody of Junior and Princess.

Peter spent yesterday evening at the TV Quick and TV Choice Awards in his new role as reporter for This Morning. He has denied he is in a relationship, while Katie is seeing Alex Reid.