Katie Price wore a Jordan necklace as she visited a beauty salon in Brighton with Alex Reid over the weekend. Yet more revelations about Alex are hitting the news, with claims that he admitted to taking cocaine. Kate is continuing to cement their relationship, however, and has met Alex's parents. Peter Andre is also moving on, saying he's ready to start dating, although he's also said he'd like to return to familiar territory and report on I'm A Celebrity in his new role on This Morning. Both Katie and Peter were in Manchester for Pride yesterday, and while Kate got a bad reception, she didn't let that subdue her excitement about her new dressage horse called Jordan's Cross Dresser. She has also displayed her horse riding skills in a new ad for Freeview alongside Piers Morgan, Duncan Bannatyne, Heston Blumenthal, Amanda Holden, Kirstie Allsopp, Phil Spencer and Postman Pat: check it out after the jump! 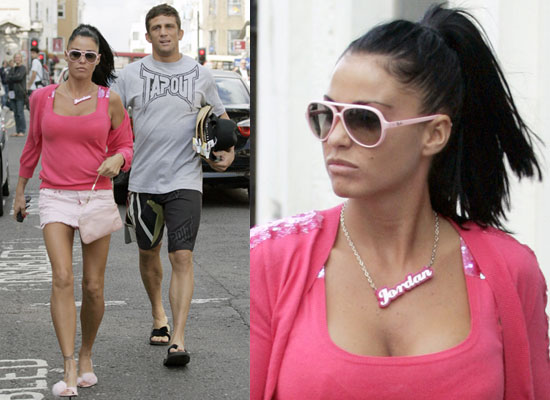