Jordan/Katie Price spent the weekend in LA with her family, keeping her rollers in for lunch at The Kitchen in Cross Creek on Friday and then putting her hair in to a ponytail for another meal in Malibu at Tony Taverna yesterday. After speaking about wanting to heal the rift with Jade Goody, Kate reportedly wants to attend Jade's funeral on Saturday to pay her respects, but Jade's loved ones have apparently banned Kate from the service. When Jade revealed she had cervical cancer, Kate said: "I can’t believe she is paid for interviews on subjects that people are really traumatised by". Jade forgave her for the criticism, but some members of Jade's family reportedly have not forgiven Kate for what Jade's friend called her "unbelievable hypocrisy", since Kate talked to the media about the cancerous growth on her finger in 2002. 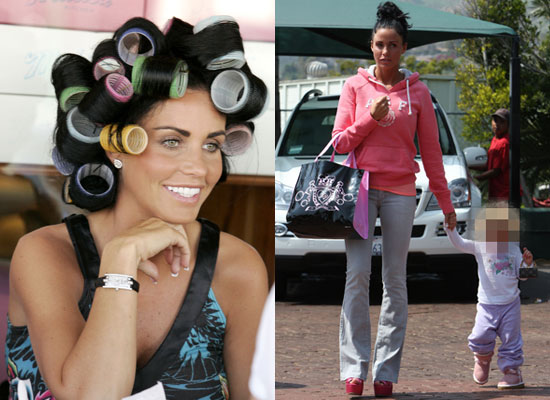 While it looks like Kate won't be there, Michael Jackson reportedly wants to attend the funeral, with a source close to Jack Tweed saying: "Michael has been very moved by Jade's story. He has pledged to offer any support he can." Jade's sons will not attend the service, and are reportedly flying to Australia with their father Jeff Brazier today, while a commemorative statue or plaque near Jade's childhood home is being considered by the council.