While Jordan/Katie Price spent the weekend shopping and going for lunch with Peter Andre and the kids in Los Angeles, it was revealed that she was sexually attacked in a park when she was a six-year-old. Kate made the tearful revelation in an interview with Piers Morgan as part of his ITV Life Stories series, which will air next Sunday. Kate is facing her demons now, though, and has even decided to give up facial plastic surgery since seeing so much of it in LA, telling The Mirror: "it’s made me realise it is time for me to stop having work done to my face. All the women look identical. They have the same lips, noses and frozen expressions and it’s not attractive. So I’ve promised to stop having Botox, collagen and fillers." 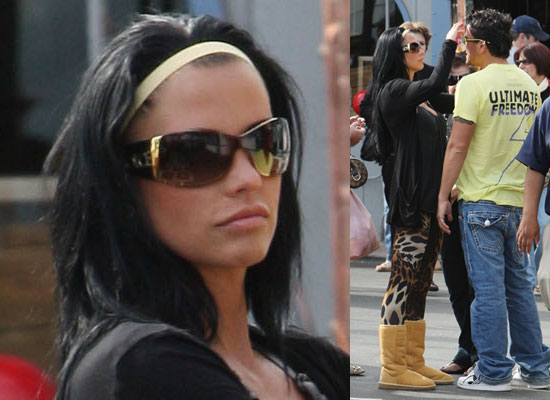 Kate's got plenty of projects to focus on, including the London marathon, and has spoken about training with Tana and Gordon Ramsay. She's even talking about the possibility of dining with Victoria Beckham to "put the past behind us". Kate and Pete have also got a new obsession with aliens, and are planning a UFO-spotting trip to Roswell in New Mexico. It's great to see Kate putting past bad experiences behind her and looking to the future.

To see more pictures of Kate and Pete on their family day out, just read more.