Stars of the big screen gathered at the Grosvenor House Hotel in London for the Empire Film Awards tonight. Avatar was the big winner, with three awards for Best Director, Best Actress and Best Film, while Aaron Johnson took time out from promoting Kick-Ass to collect his Best Newcomer Award, having posed with fiancée Sam Taylor-Wood on the red carpet. Sherlock Holmes won Best Thriller, and Jude Law was back in the UK after his Paris work trip to be presented with his Empire Hero Award by Gwyneth Paltrow. 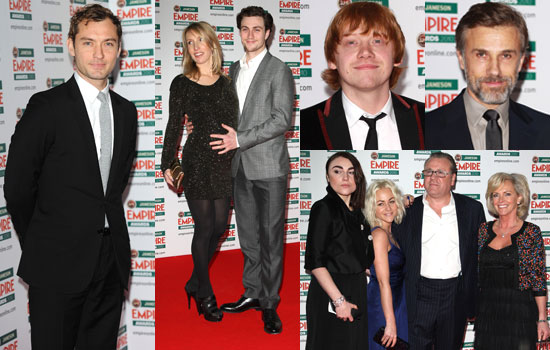 Christoph Waltz collected his Best Actor Award, beating Robert Pattinson, Ian McKellen was there to be crowned Empire Icon and Ray Winstone's family watched as he was awarded for his Outstanding Contribution to British Film. Rupert Grint, Sarah Harding and many more stars also came out for the awards ceremony: check out all the photos after the jump.

BEST HORROR
Let The Right One In

BEST COMEDY
In The Loop