Jude Law was mobbed by fans as usual as he left Wyndham Theatre after performing in Hamlet last night. Following the revelation that Jude is to become a father for the fourth time, the identity of the mother of his unborn child has been revealed. Her name is Samantha Burke and she is described as an aspiring model and actress who lives in Florida. The 24-year-old and Jude reportedly had a week-long fling in New York City around Christmas time. Samantha's lawyer said: "Since informing Mr Law of the pregnancy he has been nothing but responsive and supportive of Ms Burke and the pregnancy." The baby, due on 6 October, is reportedly a girl whom Samantha plans to call Sophia, and Jude hopes to visit every month. 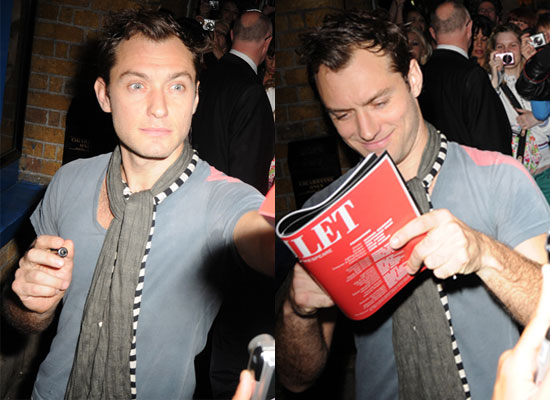 Lots more pictures of Jude and his fans, so just read more.