Jude Law kept his phone to his ear as he arrived at Heathrow Airport yesterday, after braving the New York rain earlier in the week. He's been busy with Repo Men promotional duties in NYC, which included hosting SNL and appearing on Regis and Kelly plus The Daily Show: watch clips of both after the jump. Jude is back in the UK for Sunday's Olivier Awards, where he is scheduled to present and is also nominated in the best actor category. Rupert Friend is also on presenting duty and his girlfriend Keira Knightley is among the nominees. You can watch the ceremony live on the Olivier Awards website at 6.30pm on Sunday. 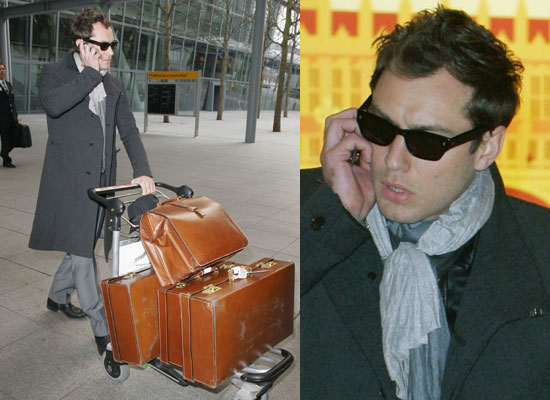 To watch Jude's interviews and see more pictures of him at Heathrow, read more.

Jude on The Daily Show

Jude on Regis and Kelly