Rachel Weisz and Jude Law smiled wide as they posed with their awards for Best Actress and Best Shakespearean Performance at the Critics' Circle Theatre Awards at the Prince of Wales Theatre in London yesterday. While Esquire's most marriable woman Rachel said she hopes to return to the London stage soon, when Jude was asked if he had more theatre roles in the pipeline after his performance in Hamlet he replied: "No roles at all — apart from being a dad." Jude has also been talking about the pressure of good looks and getting older, saying: 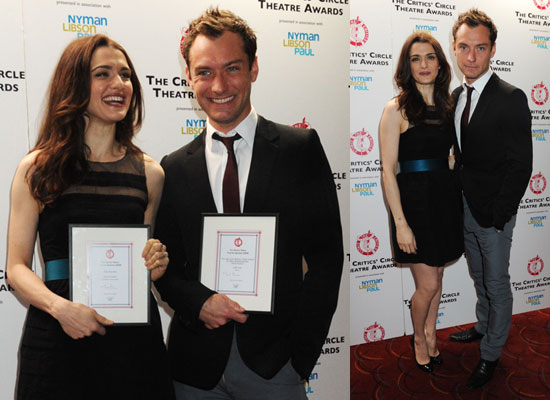 "I think it will be interesting to be old. It involves a lot of possibilities. The future doesn't frighten me at all. On the contrary, I am looking forward to it. If I have a look around at the moment I feel great relief because finally others are entering the limelight. Men like Robert Pattinson must now play the Adonis. For me it was always a restraint, a restriction... My goal was always to be recognised as a good actor but no one was interested in that, simply because society just wants to warm towards your appearance. This is the great blemish of society."

What do you think of his comments?