The cast of Guy Ritchie's Sherlock Holmes were full of smiles even though they were covered in blood while filming on location in London yesterday. With reports of a possible reunion with Ryan Gosling on the cards it's no wonder Rachel McAdams is grinning, and Robert Downey Jr and Guy Ritchie were chuckling too despite the cold, so it looks like Guy isn't too stressed about all those contradictory reports about his divorce settlement. Although I wasn't too sure about Jude Law's new facial hair when I first polled you back in October, it's now really grown on me and the majority of you guys agree, as Jude's leading my favourite moustache-for-a-role of 2008 poll. He's in the running to be crowned your favourite British male too, so get voting! 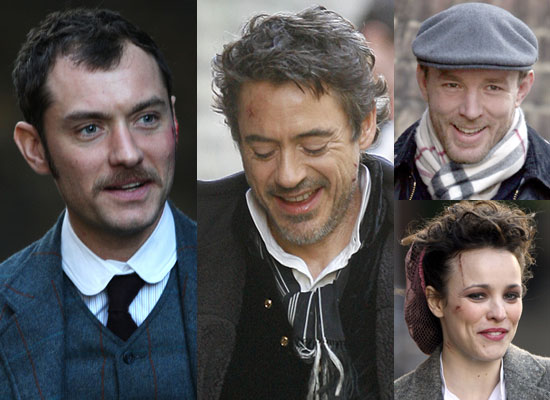