After its opening show on Friday, London Fashion Week continued at a pace over the weekend, with several shows and celebrities in attendance both in the front row and on the catwalk. On Saturday, Daisy Lowe and Jo Wood strutted their stuff on stage at Vivienne Westwood's St Trinian's inspired show, which drew a starry front row including Jo's daughter Leah, Kanye West, Nicola Roberts, Jaime Winstone, David Walliams and Erin O'Connor. 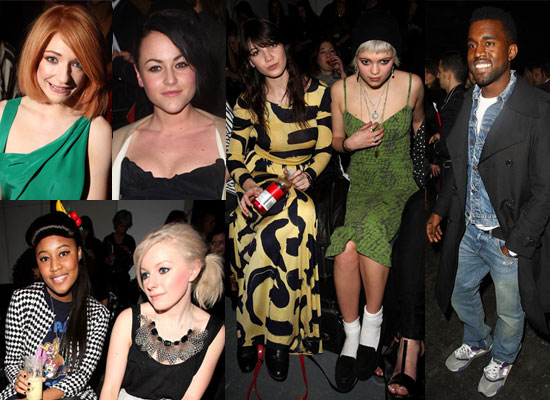 Erin was back to work for the Qasimi show, which had an impressive model list with Yasmin Le Bon, Lily Cole, Jade Parfitt and Jasmine Guinness, and Anna Popplewell and Simon Le Bon watching. Robert Nicoll presented his new line for Topshop, and the Topshop Unique show saw ribbon-enhanced plaits on the catwalk and VV Brown, Little Boots, Pixie Geldof and Daisy Lowe on the front row. You can keep up with the gossip by following my girl FabUK's twitter.

To see more pictures of all the celebs at the shows, just read more.