Jetsetting couple Russell Brand and Katy Perry left the UK for Los Angeles last night after spending a little time at his home in London. With her Union Jack nails, Katy was showing her love for all things British as she laughed with her fiance at Heathrow airport. It's no wonder she's an Anglophile after Russell's impressive proposal in India, which she says "involved fireworks, elephants, Indian dancers, horse-drawn carriages, and tens of thousands of flower petals." While Katy finishes off her upcoming album, Russell's got Get Him to the Greek coming out in June and it's also been announced he'll be starring in a remake of Arthur too. I wonder when they'll find time to tie the knot! 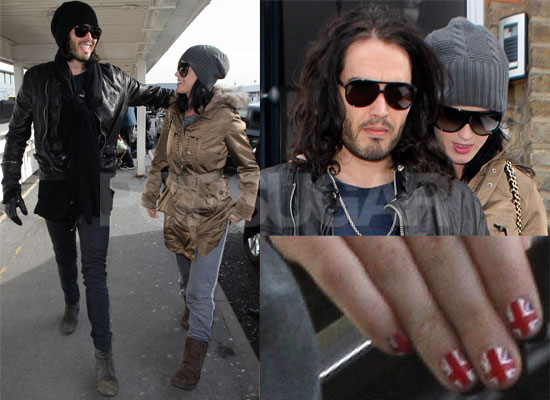 Celebrity Instagrams
Oops! Aliens Mistake Zooey Deschanel For Katy Perry in "Not the End of the World" Video
by Monica Sisavat 4 weeks ago