Keira Knightley wore her familiar outfit of boots, jeans and snuggly coat as she left the Comedy Theatre last night. She's been treading the boards in The Misanthrope all month to mixed reviews, as rumours have circulated about her relationship with Rupert Friend and her possible nude portrait. The latest report about her professional life claims Keira will star in a film version of Christopher Hampton's play The Talking Cure, about a Russian-Jewish psychiatric patient (whom Keira will reportedly play), who is thought to have inspired discoveries made by Jung (played by Michael Fassbender) and Freud (played by Christoph Waltz). It sounds like Keira has lots to look forward to in 2010, following a busy year that culminated in a cookbook Christmas present wish! Keira reportedly said: 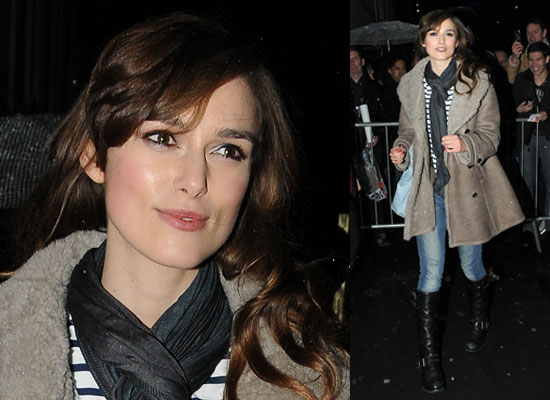 "I am not the best cook in the world. I have tried but I really am hopeless. I can cook maybe one dish. But even then, if you ate it you'd probably end up with food poisoning. Recently, a friend was teaching me how to make an eggplant bake. I brought it out of the oven in this beautiful bowl — and dropped it. It smashed all over the kitchen, and I burst into tears. Which is why I will ask Santa for some easy-to-understand cook books."

I wonder if she got what she wished for?