Twilight's Kellan Lutz, Vampire Diaries's Paul Wesley and True Blood's Stephen Moyer made it quite the bloodsucker convention in NYC last night at Cosmopolitan Magazine's Fun Fearless Males bash. Elsewhere in the city, another undead star, Robert Pattinson was at the red carpet premiere of his new movie Remember Me. Gerard Butler was still sporting a tan from his February full of shirtless holidays with beautiful stars including Mexico with Jennifer Aniston. Ed Westwick helped round out the crew, looking dapper as ever as some of his Gossip Girl costars wrapped up a day of filming in Brooklyn. 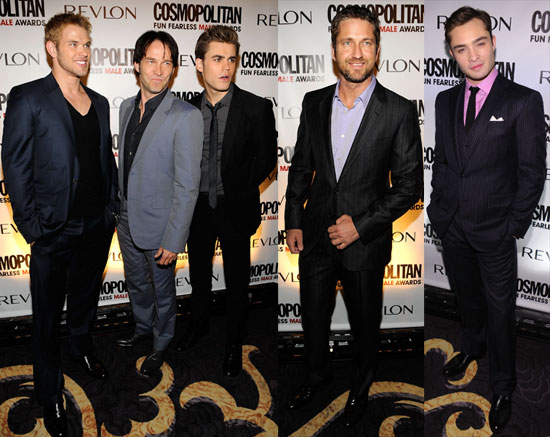 To see more of the guys including Ne-Yo, Chris O'Donnell, Terrell Owens and others just read more.