Kiefer Sutherland showed off his casual style yet again in a jumper and jeans as he arrived at Ye Waverly Inn in New York City this week. After travelling around Europe promoting Monsters vs Aliens for the last few weeks, Kiefer could no doubt do with a restful few days holed up in a hotel room. Following the confirmation that 24 will return for an eighth season, it looks like life won't be slowing down too much for my favourite action hero, but hopefully Kiefer will still find time for romantic trips with his girlfriend. Talking about the finale of 24 Day 7, Kiefer said: 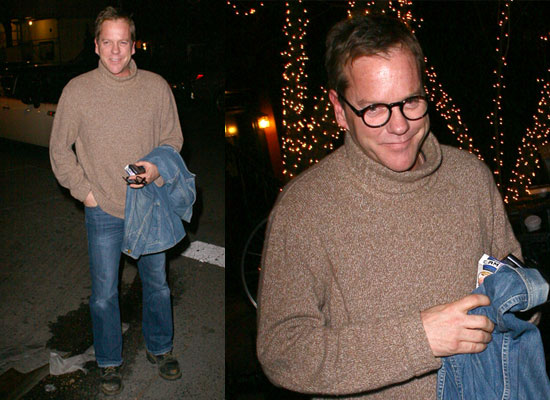 "The most I can tell you about it is that it's not going to end because someone cuts two wires and the clock on the bomb stops. It is going to end with some of the characters going through a very difficult emotional dilemma which will be much more dramatic than a big action sequence. I believe that it's the most powerful important ending that we've ever had to a season."

I can't wait to find out what happens, what about you?