First Kristen Stewart dyed her hair black to take on the role of Joan Jett, then she had it cut into a mullet style, and earlier this week she stepped out on set as Joan as filming started for The Runaways. Wearing a leather motorcycle jacket and trousers, she ran up the street in the blazing California sunshine — hot work! She also wore a Niagara Falls t-shirt and some flared stonewashed denim jeans while shooting another scene, the costumes in this movie are going to be great to see onscreen. I wonder what she thinks of her Twilight costar Robert Pattinson winning his Sexiest Man on the Planet title! 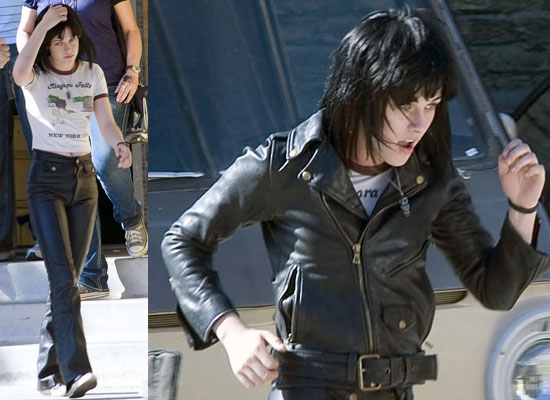 To see more photos of Kristen and Joan on the set of The Runaways, just read more.