Kristen Stewart showed off her new Joan Jett style haircut finally yesterday, no longer hiding the chop under her hood! She went out with Dakota Fanning yesterday to the petrol station on a break from the studio where they're preparing for new movie The Runaways which is a biopic of the all girl band that formed in 1975. It's definitely a step away from her Twilight character Bella — I wonder if she'll have to wear a wig when she starts filming the third movie later this year? For all of you who can't wait for New Moon, check under the cut for some behind the scenes footage featuring Kristen, Taylor Lautner and the delish Robert Pattinson! Back to Kristen's new hair, though — do you love it or hate it? 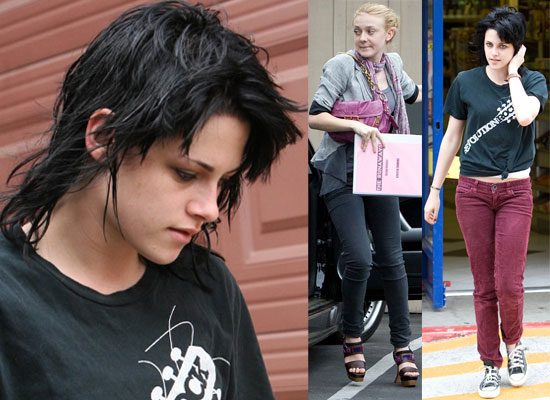 To see more photos of Kristen's new 'do, Dakota carrying her script, and a glimpse behind the scenes of New Moon featuring Kristen and costars Taylor Lautner and Robert Pattinson, just read more.