Kylie Minogue was in Paris today for lunch with French designer Jean Paul Gaultier. I love her casual look, the off the shoulder top and fringed boots are oh-so-casual, yet just smart enough, right? Kylie's been speaking out about her style secrets, as well as her thoughts that she's not destined to get married and have children — she said: 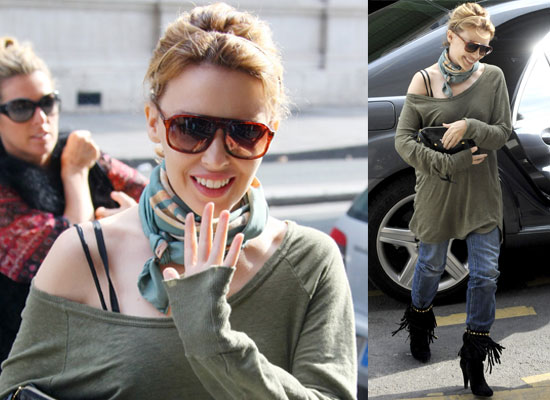 "There are days when I think, actually, that’s not the right path for me, I never really felt I was made for an ordinary life, like a husband and a terraced house in the suburbs. A great dream of mine is to be in a film musical, I know it would be such a fun challenge. It would incorporate so many different aspects of what I already do."

She was fun in her brief appearance in Moulin Rouge, so I'd love to see her in a bigger part in a musical in the future!