Leona Lewis brought a splash of bright pink to a grey London day as she arrived at the BBC Studios in Maida Vale with her Stella McCartney Falabella Bucket Bag for her appearance on Radio One's Live Lounge. The singer performed her single "I Got You" and her cover of Oasis' "Stop Crying Your Heart Out" — check out audio of the songs and interview after the jump. Leona chatted with Fearne Cotton about the Golden Globes and revealed she's Team Jacob after meeting Taylor Lautner! She's using her voice to help others by teaming up with artists like Rod Stewart, JLS and Michael Buble to take part in the Haiti charity single organised by Simon Cowell, which will be a cover of REM's "Everybody Hurts". Leona said: "You can definitely count me in. What's happened is absolutely heartbreaking and I really hope everyone pulls together to help". It's great to see so many stars doing their bit to help. 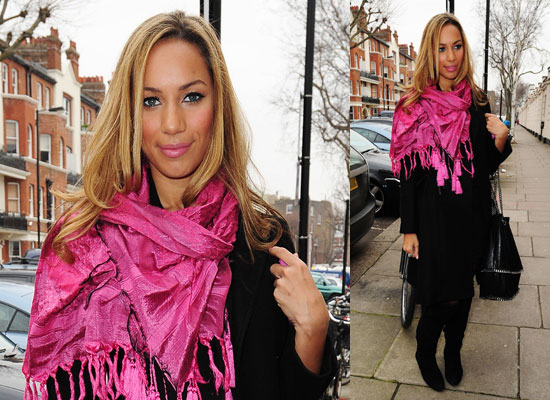 To listen to Leona's performance in the Live Lounge, just read more.