Lily Allen was back at her regular London haunt The Groucho Club last night, attracting attention in her bright lipstick, leopard print coat and green boots. After the comments she made in an interview with The Word magazine were published, a statement has been released to clarify Lily's position on drugs. The comment had been in reference to a new song "Everyone's At It", and her publicist stated: 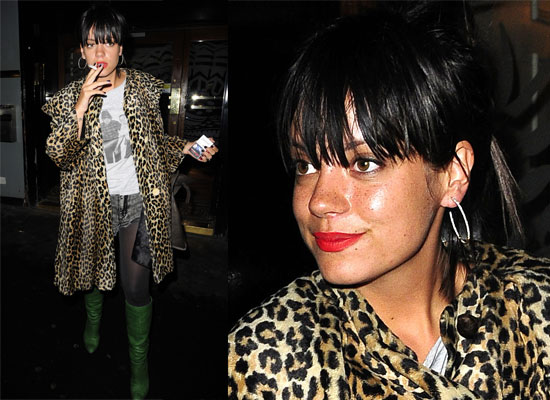 "At no point does she say that drugs are a good thing or that she condones drug use; in fact, she says that 'I can spot the signs (of people on drugs) and it terrifies me'. The song itself talks about a culture of both legally prescribed drugs like anti-depressants and also illegal drug use. Lily Allen would like to state unequivocally that she does not condone illegal drug use and has every sympathy with individuals and families whose lives have been blighted by drugs."

The majority of your comments on yesterday's story agreed with Lily's view on how drugs are viewed in the media, how do you feel about the release of this statement?