Lily Allen matched her gorgeous glittery silver shoes to her silver eye makeup when she performed at Postbahnhof in Berlin on Sunday. Life is certainly getting busy for Lily: as well as starring in Chanel's new ad campaign the singer is turning her attention to the property market, as she is reportedly looking to buy a property in south west London to rent out. She'll be in London on 11 May for the third and final gig of her MySpace Secret Show series, and said: 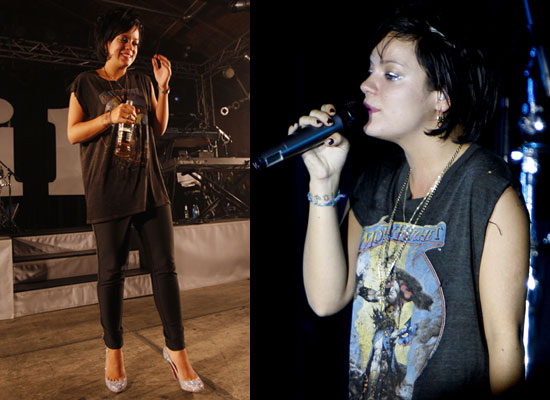 "The fans at the Tokyo and New York MySpace Secret Shows were totally amazing and I expect nothing less from the home crowd. To give it an extra layer of excitement I'm asking fans to dress as London Tube stations - but they won't know exactly where I'll be performing until the day."

Sounds like the crowd will look as interesting as Lily herself!