Lindsay Lohan and Samantha Ronson spent a night out at Faces nightclub in Essex last night, partying it up with people like Big Brother winner Brian Belo and Danielle Lloyd. Pretty far from their usual Hollywood crowd, I think! Lindsay arrived at Kings Cross from Paris earlier on Sunday following a flour attack by an anti-fur PETA protestor when she made an appearance at a theatre in the city. Samantha hit out at the protest via her MySpace blog, here's an extract of what she said: 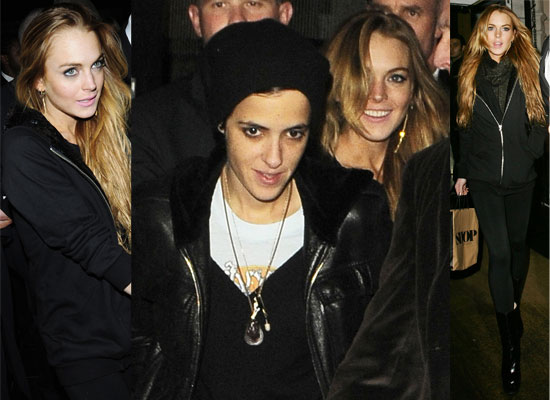 PETA should focus their efforts on educating people on what they believe are injustices instead of seeking press via harassing those in the limelight. I received an apology too many days late from the PETA folks (the blog removal was too little too late) and today I'm pissed at the bag of flour thrown on Lindsay last night. Not because I got powdered down, but because the girl who threw it acted like an animal herself. I take that back, it's an insult to animals to group her in with them, my dog is FAR more civilized than that person. I would have more respect for them if they didn't use other people to get their point across. Lindsay, Mary Kate, Ashley Olsen, Anna Wintour and the rest of the targeted celebrities aren't the problem, I'm pretty sure they're not the only ones wearing fur, in fact, they should be appreciated by PETA for giving them a target. If it weren't for them, who would get them press?????

What do you think about Samantha's sentiments?