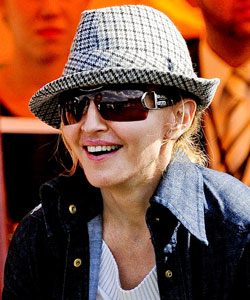 It has just been announced that Madonna has won her appeal to adopt Mercy James. In April, Judge Esmie Chondo ruled out the adoption on the grounds that prospective parents had to be resident in Malawi for 18 months. This rule had been waived when Madonna adopted David Banda from the country in 2006. Madonna appealed against the decision, and despite Mercy's father's opposition, Malawi's highest court has ruled in favour of her appeal today. The appeals court said the original decision did not take into account Madonna's commitment to helping disadvantaged children. Malawi's chief justice, Lovemore Munlo, praised Madonna's interest in helping orphans, saying she was financially stable and Mercy would have a better life with her.