We've already seen gorgeous women head to Italy for the Venice Film Festival, and now some gorgeous men have arrived on the scene! Matt Damon donned his shades as he travelled by boat from the Excelsior Hotel to the Palazzo del Cinema to join Steven Soderbergh for The Informant! photocall yesterday, before changing into black tie and taking his wife Luciana to the film's premiere last night. George Clooney arrived in Venice with his girlfriend Elisabetta Canalis yesterday, his hand in a bandage from shutting it in a car door: ouch! Today George joined costar Ewan McGregor and director Grant Heslov for the boat trip to the photocall for The Men Who Stare At Goats. What a manjoyment-filled couple of days! 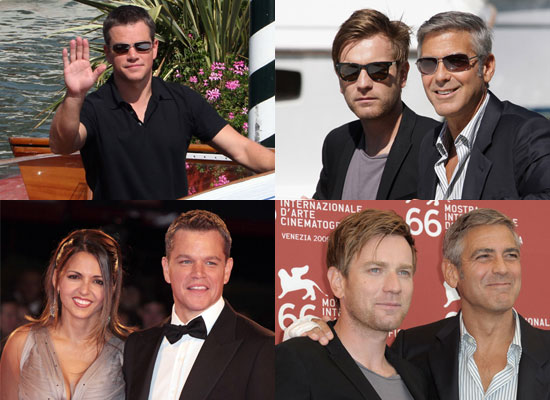