Naomi Campbell made the headlines in April when she was removed from a British Airways plane and arrested at Heathrow Airport after allegedly spitting at a police officer. She reportedly became angry when told one of her bags hadn't made it on to the plane, and had to be dragged from her seat "ranting and screaming". 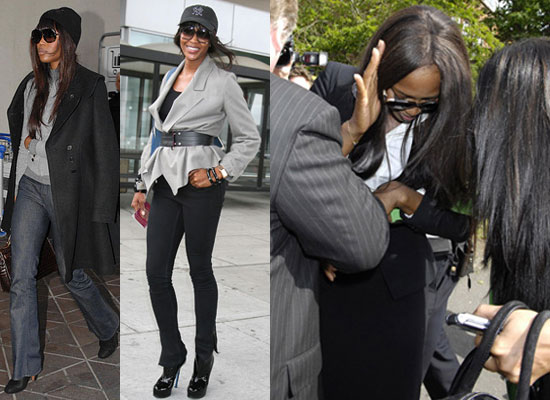 The next day, after she had been released on bail, her spokeswoman said Naomi was told her bag had gone missing, and "BA decided to resolve this by insisting she leave the flight and then called the police to forcibly eject her from the flight... BA have still failed to offer any explanation as to why her bag went missing at Terminal 5."

The following week, BA banned the supermodel from flying with them. Naomi's spokeswoman said her client still hoped the situation could be "resolved amicably". However, just two weeks later it appeared that both parties had changed their minds, with Naomi deciding to boycott the airline after claiming that BA asked her back. She happily posed at JFK Airport, having flown from Heathrow with Virgin Atlantic.

To take a trip down memory lane and remember what happened next, just read more.

At the end of May, Naomi answered bail at Heathrow police station and was told she would be charged with offences relating to the incident. On 20 June, Naomi pleaded guilty at Uxbridge Magistrates' Court and admitted to four of the six offences (the Crown Prosecution Service dropped the other two). Naomi's spokesman said the incident was "regrettable". She was sentenced to 200 hours community service and fined £2,945 pounds.

Within days, rumours suggested Naomi was claiming that air staff called her an offensive name, and that BA staff were threatening to sue over the allegations. This all happened in the days leading up to Nelson Mandela's 90th birthday celebrations in London, and rumours suggested that Naomi had been removed from the guest list as she was wearing a cap with Nelson's prison number 46664 when she was arrested at Heathrow. However, Naomi's spokeswoman said: "She was never planning to go to the concert". This sums up the contradictory reports that surrounded the story, which was one of the biggest headlines of 2008. Stay tuned for more!