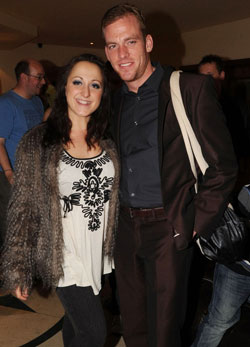 Natalie Cassidy has announced today that she is 12 weeks pregnant, revealing the news to OK! The former EastEnders star has been dating Adam Cottrell, a transport manager, since June 2009 when the pair met at the Isle of Wight Festival. Natalie joins a whole host of famous first time expectant mums!

Natalie has polycystic ovaries and was concerned about whether she could conceive, so she is over the moon at the news, saying:

"I wanted children so much, it was a worry. I came off my contraception in November but I never thought I'd get pregnant that quickly!"

The Strictly Come Dancing contestant has also spoken about her cravings, adding:

"I can't get enough of chicken, mayonnaise and sweetcorn sandwiches! But I've been eating healthily — I've not been noshing down four cream cakes in one sitting and claiming I'm eating for two."

Congratulations to Natalie and Adam!