Three Weasley siblings Ginny, Fred and George (aka Bonnie Wright, James Phelps and Oliver Phelps) plus Draco Malfoy (aka Tom Felton) were in Paris yesterday for the Harry Potter and the Half-Blood Prince Train Launch at Gare du Nord Station. The train will travel on an 11-city promotional tour, giving fans the chance to get up close to costumes and artefacts from the film. Daniel Radcliffe, Emma Watson and Rupert Grint were no doubt too busy filming Harry Potter And The Deathly Hallows to attend the train launch, but I'm sure we'll see them all when the sixth film premieres in the UK on 7 July ahead of its release on 15 July. I can't wait! 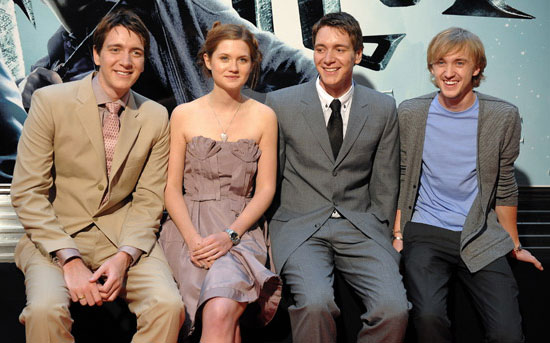