The fashion crowd are in France this week as Paris Fashion Week is well under way. We've already seen Charlize Theron at Dior and Salma Hayek at Balenciaga, and plenty of Brits joined them on Friday. Kristin Scott Thomas, Bianca Jagger and Jade Jagger were at the Lanvin show, while Georgia May Jagger was watching Pamela Anderson making headlines with a wardrobe malfunction on the catwalk at the Vivienne Westwood show. Peaches Geldof was everywhere, showing off her plaits on Saturday after jokingly "marrying" her friend. 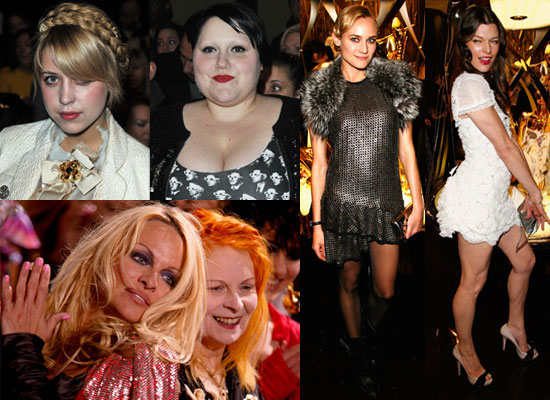 Fellow Fashion Week devotee Kanye West was also getting his fill of the ready-to-wear shows with his girlfriend Amber Rose, alongside Anna Wintour, Lou Dillon and Beth Ditto, who is expected to perform for Fendi later this week. Lots of stars came together for Roberto Cavalli's boutique opening party, including Diane Kruger and Milla Jovovich as well as Peaches, Kanye and Jade. Check out my girl Fab UK's round up of the weekend's shows.