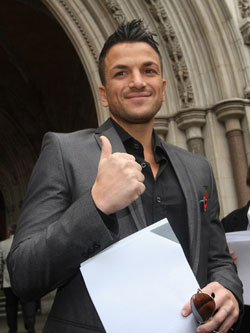 Peter Andre gave the thumbs up outside the Royal Courts of Justice today after accepting "substantial" damages from Now magazine. He sued over an article published in July which claimed he was lying when he portrayed himself as a loving father and husband. Peter's solicitor, Gordon Williams, told judge Mr Justice Eady that the article claimed Peter may have been at fault for two of Harvey's accidents, and added:

"Mr Andre was also said to have demanded sick sexual threesomes from his wife, which horrified her and which she did not enjoy, feeling used and like a sex doll. As a result, Mr Andre was said to be lying in portraying himself as a loving father and husband."

Peter read out a statement outside the High Court, saying: "I take my responsibilities very seriously. I would never do anything to hurt my children, whom I love very much."

To watch Peter read his statement and see more pictures of Peter outside court, read more.