Prince William continued his tour of Australia yesterday with a BBQ and reception in the Botanical Gardens in Sydney with New South Wales Premier Kristina Keneally. He boarded a jet boat for a harbour ride, met the many fans who came to greet him, and fired a machine gun during his visit to the Royal Australian Regiment third battalion. At Garden Island naval base Wills inspected some coral, and at the Redfern Community Centre he read to children, played table tennis and was presented with a gift by an Aboriginal elder. An elderly woman asked the question we all want answered — "When are you getting married?" — to which Wills responded: "As I keep saying,wait and see". I can't wait for the official announcement! 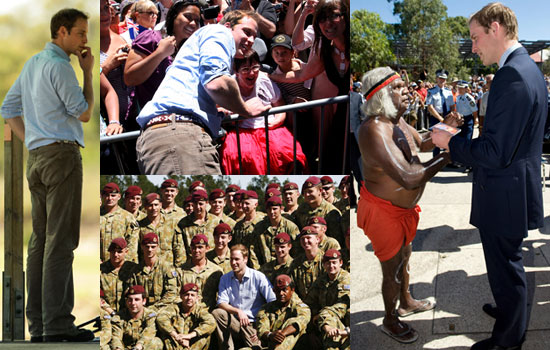 To see more pictures of Wills Down Under, just read more.