Prince William wore a casual outfit of bodywarmer, jeans and trainers for a night out at Raffles on Saturday, grinning wide as he climbed into his car after leaving the club at 3.25am. It's been a couple of months since we last saw Wills out clubbing, and just last week we spotted Kate Middleton at a film premiere. Wills has arranged his trip to New Zealand and Australia to make sure the couple will be together to celebrate Kate's 28th birthday on 9 January, as he missed her last two birthdays. It looks like Wills is doing a great job balancing his social and personal life with his official duties, and has set up the Charitable Foundation of Prince William and Prince Harry, which will give grants to needy young people and wounded service personnel. As FA President, Wills has also given his backing to England's 2018 World Cup bid, saying: 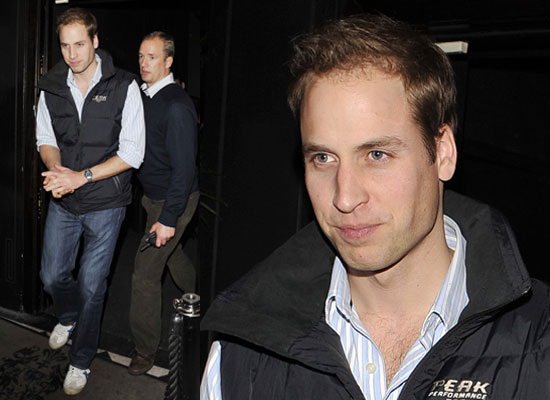 "England's love for the game is world renowned. Football is in our blood. We're proud of our great cultural diversity. We will offer a warm, home-from-home welcome to all the participating teams and their supporters. As a nation, we are united behind the bid. Speaking personally, I am very proud to be supporting it. I believe, with England's great passion for the game, we will stage a World Cup to remember forever. A first-class festival of football. 1966 and football are one in England's psyche and collective memory. It is the stuff of legend. For young people like myself, who were not around to experience the pride and excitement of that time, the opportunity to live it first hand will be an enormous privilege."