Prince William and Prince Harry have taken to their bikes to take part in the Enduro Africa 2008 Motorbike Rally in South Africa to raise money for Sentebale, Unicef and the Nelson Mandela Children's Fund. Harry is looking forward to spending time with his brother, saying: "We never really spend any time together as we have both got separate jobs going on at the moment. So it is going to be great fun". The pair spent time together last week when they partied with Christina Aguilera and Paris Hilton. While Pink is furious Wills hasn't responded to her anti-fur and hunting letters, he certainly impressed Paris: she's invited him to the opening of her new club in Las Vegas, having partied with him last week, but Wills politely turned her down. Shame. 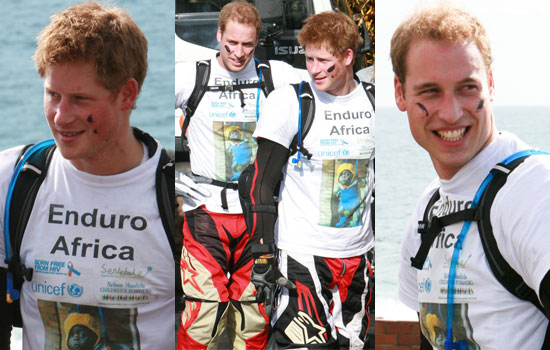 We've got more pictures of Wills and Harry on their bikes, so just read more.