Prince William donned a rather splendid hat with huge plume as he took part in the Garter Ceremony Procession in Windsor yesterday. It's a busy week for the Royal family, what with the Trooping of the Colour on Saturday and Royal Ascot starting today, but the Queen showed no signs of tiredness as she smiled in her long cloak. Britain's Most Eligible Bachelor Prince Harry wasn't present, as the Order of the Garter (Britain's oldest Order of Chivalry founded in 1348) has a tiny membership, and Wills was only made a knight of the order last year. He joined his grandmother plus Prince Charles, Prince Philip, Prince Edward, Princess Anne and John Major for the procession. Don't they all look fantastic in their outfits? 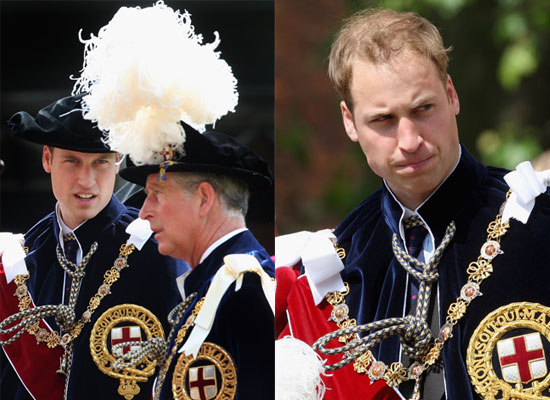 Loads more pictures of Wills and the Royals at the procession, so read more.