After the BAFTAs on Sunday, Prince William wore a Support the Household Cavalry in Afghanistan wristband as he greeted the crowds outside Alder Hey Children's Hospital in Liverpool yesterday and officially launched their Intra-Operative 3-Tesla MRI scanner facility. He also visited St Dunstan's Centre in Llandudno and met Simon Brown, who was blinded by sniper fire whilst on duty in Basra. Simon joked he wanted an invite to William's wedding to Kate Middleton, to which Wills replied: "Oh you'll have to wait a while yet". While at the centre for blind and visually impaired ex-servicemen and women, Wills tried his hand at archery blindfolded, and when he missed after he'd taken it off, he said: "Right, that's it. Still missed. I can't even hit it when I can see. That's all I am going do...it's humiliating enough as it is!" 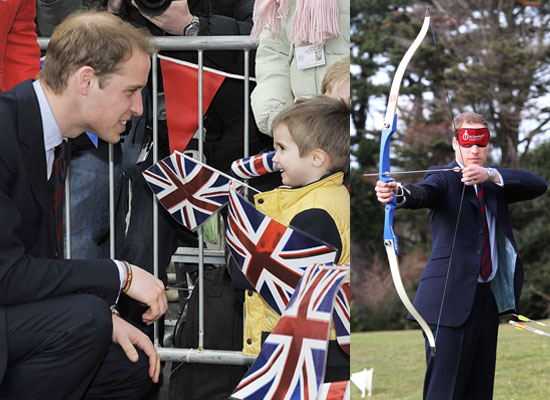