Queen Elizabeth II was full of smiles as she met all the acts backstage at the Royal Variety Performance in Blackpool last night. Peter Kay hosted the show, which kicked off with Lulu, Anastacia and Chaka Khan singing "Relight My Fire", followed by Whoopi Goldberg and the cast of Sister Act. Alexandra Burke, Michael Buble, Katherine Jenkins, Miley Cyrus and Bette Midler also took to the stage and met the Queen, as did Diversity, who won the right to perform by being crowned champions of Britain's Got Talent. Lady GaGa entered into the spirit of the family show and agreed to tone down her act, leaving out the suicide scene, and saying: "it doesn't matter because I'm a massive fan of the Queen — I was so excited and have even been practising my curtsy". We'll get to see the show on ITV1 on 16 December. 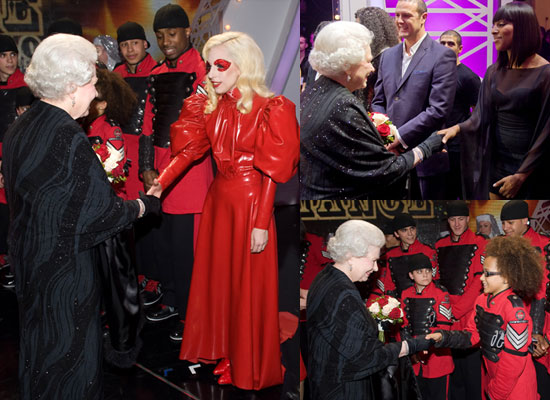