Rachel McAdams joined Robert Downey Jr and Jude Law on the Sherlock Holmes set this week, adding a little femininity to Guy Ritchie's set as love interest Irene Adler. Jude's one of the actors in my fun Best Of 2008 poll about facial hair, check out his competition and vote if you haven't! The movie is still being filmed in London at the moment, with the cast wrapping up warm over their costumes to keep out the bitter cold that's taken over the capital lately. Robert has had to suffer for his art, after a punch thrown by a wrestler as part of the movie landed and he was knocked out cold! Robert was taken to hospital and apparently had to have stitches in his mouth, lets hope they're all healed before "action" is called on any kissing scenes with Rachel! 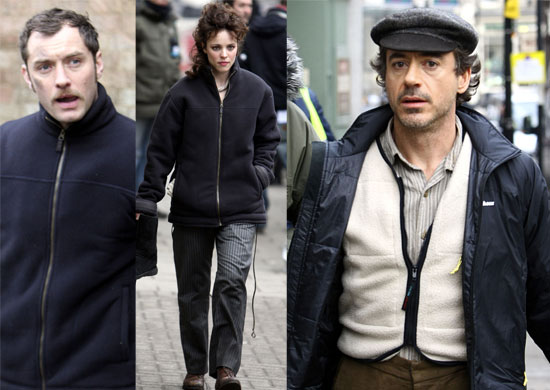