Yesterday I was lucky enough to catch Strictly Come Dancing: The Live Tour at London's O2 Arena! Eight celebrities from previous series competed live on the dance floor to be crowned that show's winner by the arena audience, who were treated to a ballroom and Latin dance from each couple. Unlike last year's tour, all four judges were in attendance this time around: Craig Revel Horwood, Arlene Phillips and Len Goodman were joined by Bruno Tonioli, and they were as hilarious as ever. Kate Thornton did a great job presiding over the glitzy proceedings, and Matthew Cutler and Kristina Rihanoff treated us to a show dance too. 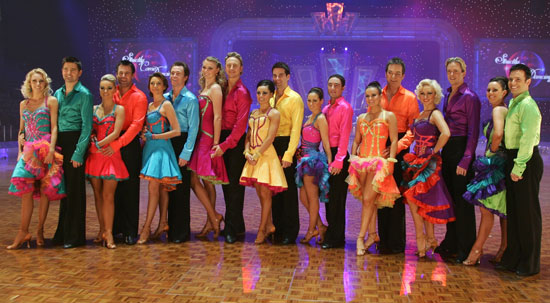 To find out more about the show, and see lots more pictures, just read more.

The live show provides just as much shine, shimmies and sequins as the TV series; in fact, the dancers' fake tans are so extreme they're causing havoc with their hotel sheets, which are reportedly covered in streaks and creating huge laundry bills!

Fortunately all eight celebrities and their professional partners were well enough to perform. The tour has been hit by sickness since it started in mid-January, with several contestants too ill to perform. Jodie, Cherie, Jill and Kenny all had to miss performances, and backstage staff also suffered.

Everyone was on the floor yesterday, though, and the 12,000 strong crowd was loving every minute. What Julian Clary lacked in technique he certainly made up for in humour, and even made Craig crack up with genuine laughter. He was so popular he was left in the final two as Kate announced the audience's winner.

My favourites Rachel and Vincent were top with the judges and the audience, and proudly lifted the glitter ball amidst congratulatory kisses: Vincent even got the bumps! He was very pleased as his Italian parents were there.

If you're missing Strictly already, then I've got some good news for you: Strictly Come Dancing: The Best of Series 6 is out on DVD today. There are also plans to release a whole range of merchandise in time for the start of the next series, from nightwear and children's clothes to glitter balls, bags, iPod covers and stationery. Siting!

Makeup
I Tried Pai's Bronzing Drops, and It Helped Me Nail the Post-Holiday Glow From Home
by Jessica Harrington 6 days ago