Robbie Williams and his girlfriend Ayda Field arrived in Los Angeles last night after he finished up his promotion commitments in France for his new single "Bodies". We saw Robbie in Paris earlier this week as he made his way from his hotel in his pyjamas while carrying a lightsaber, and he still injected a little fun into his outfit at the airport with some brightly coloured sunglasses! NRJ radio played host to Robbie while he was in France and they filmed the interview, which has Robbie speaking French, catching up with David Ginola, and re-extending an invite to his house to Tom Jones. It sounds like he's happy both in his personal life with Ayda, and being back in the spotlight with his new music! 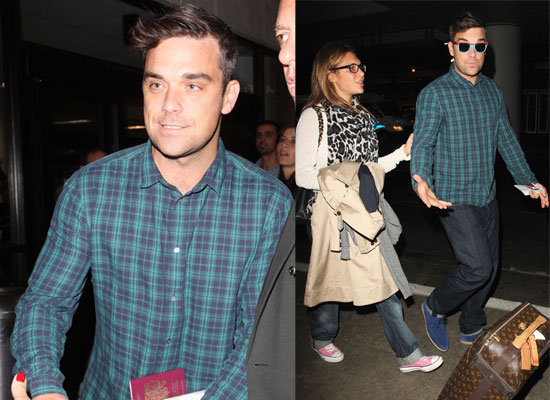 To see more photos of Robbie and Ayda at LAX, just read more.