After premiering his new single "Bodies" a couple of weeks ago, Robbie Williams was in Paris yesterday to promote that and his upcoming album Reality Killed The Video Star. He arrived at the hotel looking smart in a dark blazer, and then amusingly left again wearing pyjamas and carrying a light saber! He was also interviewed on an Australian radio station this week, talking to Dannii Minogue, and mentioned that he might be buying a home in Australia — possibly a farm in the outback. Robbie's been with his girlfriend Ayda Field for three years now and has been discussing how he wants to be a dad, saying he wants to be one: 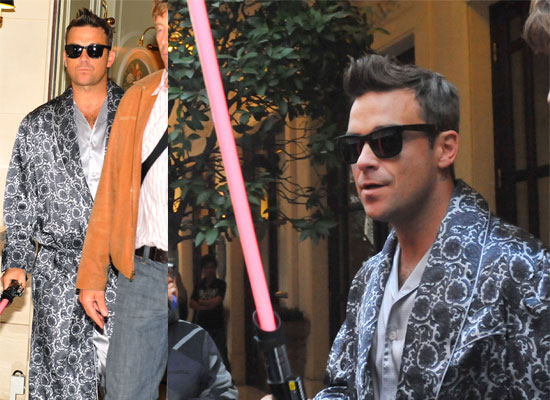 "...in the near future. It's been a slowly, slowly, catchy monkey process. I was against it. I wasn't even going to be in a relationship as far as I could see, then someone special came along and changed that. She is amazing."

It's fantastic to hear him sounding so happy!