Robbie Williams was full of his trademark funny faces as he performed live for BBC Radio 2 at Broadcasting House in London today. In between songs he chatted with Ken Bruce about life, love and his career moves: listen to the gig and interview here. When asked whether he was reuniting with Take That, Robbie said: "something's in the offing, we've been spending a lot of time with each other ... I want to be involved somehow". Ken then asked if he was going to get married, to which he replied: "Probably, but I didn't get engaged last week. It wasn't a stunt, it wasn't even a joke". He explained that his mum went along with the news because she really wants grandkids and thought it might speed along the process! Rob also revealed: "I will be going on tour... When and where I don't know, but it's in the offing... definitely before 2012". We'll get to see Robbie on The X Factor again during this weekend's final, exciting! 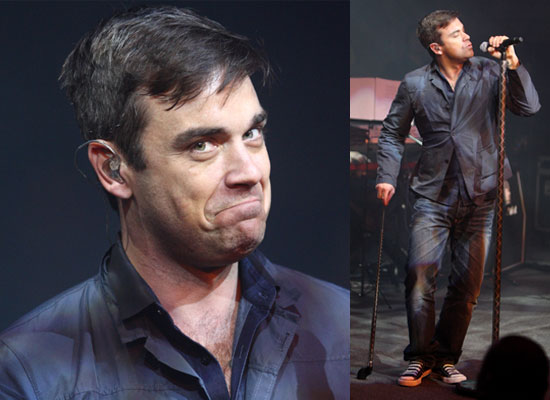 To see more pictures of Robbie and his silly faces, just read more.