Last time we saw Robert Pattinson he was looking rather dashing in his smart suit, but yesterday he was back to looking a little scruffy in his casual clothes as he filmed Remember Me alongside Emilie De Ravin. Pierce Brosnan also made an appearance on set yesterday, but Emilie and Robert filmed what looked like a rather sad scene as they sat looking sulky on the New York stoop, with Rob lighting up a cigarette too. While Daniel Radcliffe said that Robert was "genuinely sexy" earlier this week, Justin Timberlake has also commented on his sexiness — when a fan asked JT why he wasn't sexy like Rob, he replied "Because God loved him more than me." Well, I think they're both pretty hot —there's definitely room for more than one heartthrob for our manjoyment! 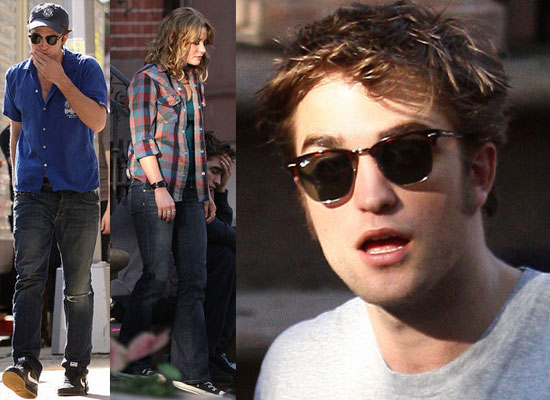 To see more photos from the set of Remember Me, featuring gorgeous Robert, Emilie and Pierce, just read more