After his appearance on The Today Show yesterday, Robert Pattinson walked the red carpet and signed autographs at the premiere of Remember Me at the Paris Theatre in New York City, and so did Kristen Stewart! The couple made sure not to get photographed together after they were spotted leaving the BAFTAs afterparty together, but Kristen was happy to stand solo and smile, while Robert looked adorable crouching down to pose for pictures with his costars Ruby Jerins and Emilie de Ravin. Pierce Brosnan, who plays Rob's dad in the film, was also at the premiere, as were fellow costars Chris Cooper and Lena Olin plus director Allen Coulter and writer Will Fetters. My girl PopUS and her competition winner were tweeting live from the red carpet, and PopSugarRush has Rob's interview with Jimmy Fallon. The vast majority of you are looking forward to the film when it comes out in the UK on 2 April and I am too! 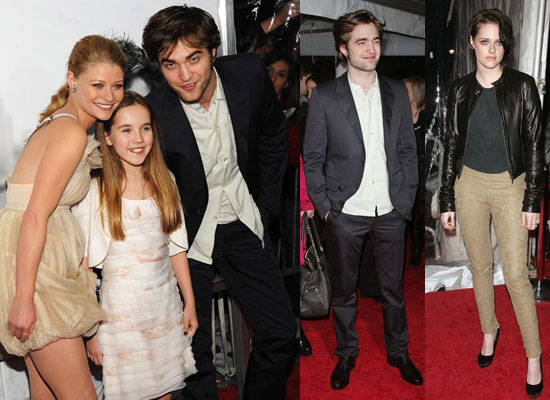 To see more pictures of Robert with Emilie and Kristen, just read more.