Taylor Lautner, Kristen Stewart and Robert Pattinson changed outfits after their photo call in Madrid to attend a New Moon fan event in the city last night. The three actors have kept each other company during their European tour of Paris and London, and Kellan Lutz has been visiting malls in the US with his partner in crime Ashley Greene, but he had to make do with a cardboard cut out yesterday in Boston as he laughed off rumours of a romance. Twilight director Catherine Hardwicke has spoken about Rob and Kristen's relationship, saying: "Nothing crossed the line while on the first film". When I met Kristen on Wednesday she also spoke about the speculation surrounding her relationships: stay tuned for all the goss! 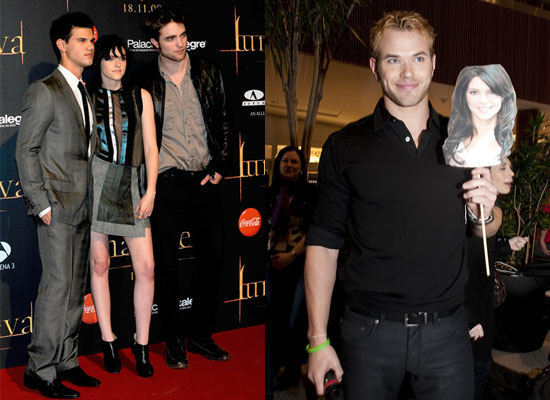