Robert Pattinson, Kristen Stewart and Taylor Lautner changed out of their casual travelling clothes and into smart attire for a New Moon photocall at Hotel Crillon in Paris this afternoon. Kristen looked girly in her pale short dress while Robert and Taylor both looked handsome in their suits. They were joined by director Chris Weitz, and the foursome will be heading to London for the UK press conference and fan event tomorrow. While the film doesn't hit cinemas until the 20th, you have a chance to see it two days early by entering my giveaway: I've got ten pairs of tickets to a preview screening on the 18th up for grabs! 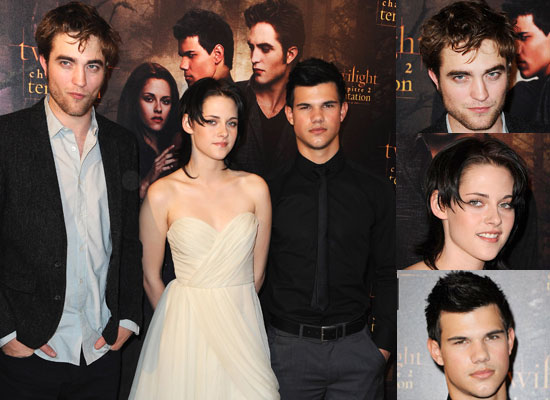 To see more pictures of Rob, Kristen and Taylor in their glad rags, just read more.