Robert Pattinson was still looking gorgeous in his shades on the set of Remember Me yesterday, but this time he was all dressed up and looking rather dashing in a suit. Pierce Brosnan was also ready for filming looking rather tanned in a grey suit, while Emilie De Ravin looked beautiful in her printed dress. With Harry Potter and the Half-Blood Prince being released this week, some attention has turned back to Daniel Radcliffe, but Dan thinks his old costar Rob is a much better looking chap than him, saying: 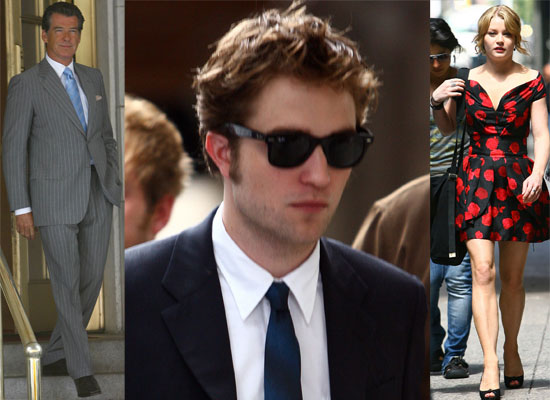 “Rob Pattinson is a genuine sexy guy. He's got the height. If girls like short and nerdy, then I'm a sex symbol! I've said probably three words to him in the last three years and that was before Twilight all kicked off. But I wish him well. Hopefully, I'll see him at some point.”

Maybe the two will even team up again in the future — would you like to see Dan and Rob work together again?