Russell Brand is still filming Get Him To The Greek, but the location has changed from New York to London and he's been filming in his home city over the weekend. Russell acted in a rowdy scene in Trafalgar Square where he and his castmates were supposed to be drinking, when one overenthusiastic cast member pushed him into the fountain! It's unclear if it was part of the movie or a prank, but Russell took it in good spirits, tweeting, "The water from the Trafalgar Sq fountain is unlikely to be bottled as a life giving elixir as, since my dip, I appear to have tuberculosis." Never fear, he is well, claiming later, "in fact I think the fountain has a Lourdes like ability to engender health." 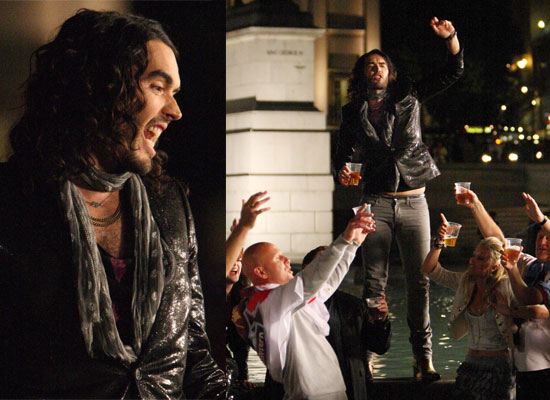 Image Source: WENN
Get Him To The GreekRussell Brand