Russell Brand took a step away from his usual all-black uniform in a brown cardi and hat as he took a wander near his home in North London at the weekend. Still present were those leggings, of which he recently said, “I call them my Testosterousers, in an attempt to make them more masculine.” I'm not sure that's working, although he also mentioned they were a freebie, so perhaps that makes them a little more understandable? 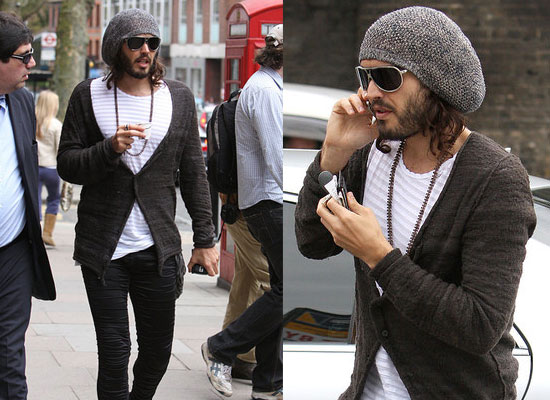 The BBC have been fined £150,000 for the prank Russell and Jonathan Ross played on Andrew Sachs — the money will come out of the channel's general budget. The friendship between Russell and Jonathan is still strong though, Jonathan posted a picture on Twitter of the two of them at his house with David Walliams and Jonathan's wife Jane at the weekend!