Russell Brand announced his return to London on Saturday, with a tweet that read, "Back in London. Sore throat but roaring libido - in the Freudian life force sense as well as the other. Apollo gig then Dionysius after 'do'." He didn't spend his entire weekend on twitter though — he certainly had some company this weekend, as a mystery blonde left his house yesterday, following the two girls in dressing gowns that had to run out of his house to save themselves from getting a ticket earlier in the week! 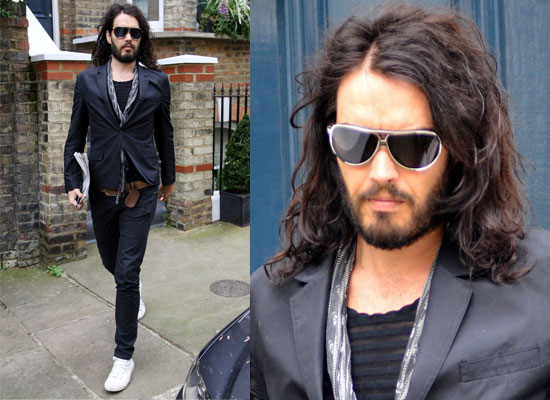 Meanwhile, a compilation of best bits from Russell's BBC radio show has been released, aptly named "The Russell Brand Radio Show – The Best of What's Legal". It was a fixture in my weekly listening schedule before the controversy that ended it, and I put in in my April Must Haves, so I'll definitely be giving the collection a listen. Will you?