Russell Brand was spotted out in London in his workout gear today, showing his legs off in shorts and socks! For his upcoming role in a remake of Arthur, Russell looks set to chop his famed locks, but he's taking it in his stride, saying: “You have to move on. I have dreams of my hair being short and I wake up in a Samson-like panic, but I think I’m ready for transformation.” Meanwhile MTV EMAs host Katy Perry has been coy about their fledgling relationship today, saying: 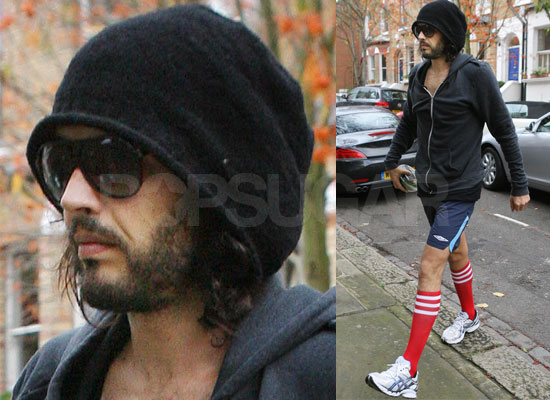 "The wonderful thing is we both have our own kind of separate talents, careers and lives and we really respect each other. I think that's really important... (But) we like to kind of keep this as our special thing."

I was lucky enough to see Russell perform a small warmup gig for his Royal Albert Hall show this weekend in Islington earlier this week and when an audience member mentioned her name, he said something very similar. Adorable!