Simon Cowell's continuing to enjoy his shirtless jet skiing holiday in the Caribbean by hooking up with his American Idol pal Ryan Seacrest, who's holidaying with his own special friend. It's no wonder Simon's keeping his friends close as he's got plenty of rivals eager to usurp him, including Gary Barlow, who wants to launch his own pop reality show. Andrew Lloyd Webber's also had a dig at Simon for rejecting X Factor hopefuls Francine and Nicola, who have now been chosen as one of Andrew's Eurovision contestants. Andrew said of Simon: "He doesn’t work with the artists like I do. I’m here to get the best out of everybody". Simon and Andrew are also rivals when it comes to their holiday homes on Barbados: when The Sun told Andrew that Simon is knocking together two houses, Andrew replied: "I can’t speak for Simon — he’s probably in Barbados extending his property near me". And jet skiing too! 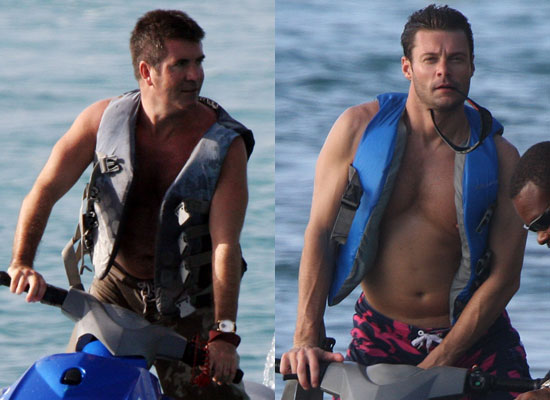 You can catch Simon and Ryan on ITV2 next Thursday when American Idol returns.